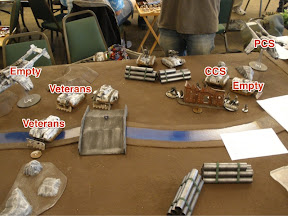 During the Ilyrian Crusade, the Corsican 523rd was deployed as an occupation force on the planet Verus.  It had previously been ‘conquered’ by the Space Marines, but the remaining heretics were anything but submissive.   After making contact with one such heretic warband, Colonel ‘Blitzkrieg’ Caine personally gave chase. However, he soon found he had fallen into a shrewd enemy commander's trap.  Fortunately for Caine, he was rather shrewd himself and had split his pursuit force into two formations for just such an unlucky occasion...

Round 3 put me up against an Imperial Guard player that I knew, but had never had the pleasure of playing against.  He mentioned that my list was probably more competitive than his, but when I looked across the table I saw two hydras, two vendettas, a plasma Russ, and load of infantry and chimeras.  I wasn’t feeling so competitive at the point.

Deployment was Spearhead, and the primary objective for consisted of a modified seized ground, where we had 3 objectives, but each objective counted for a certain number of points.  They were marked with how many points they were, but we were forced to place them face down, so we wouldn’t know how much each was worth until someone moved within 3” of it.  The three objectives were placed fairly spread out across the board.
Secondary objective was having a unit wholly within your opponent’s deployment zone at the end of the game.  I thought if Al’rahem arrived late, I could probably score this one easily. Spoiler alert: He arrived turn 2.
The tertiary objective was to destroy the bridge in the center of the board.  I believe it was armor 12 all around, and had a 3++ invulnerable save.  Neither of us would destroy it.

We rolled to go first, and he won the roll off.  I was feeling less and less competitive.  He chose a corner with an objective and some cover, effectively giving me a corner without an objective and with very little cover, a very good choice on his part.   Using Creed, he opted to outflank one of his Melta Veteran squads.
After he deployed, I looked over the field, and not wanting to get gunned down by an alpha strike, I decided to reserve my entire army. This would turn out to be a very good idea, I think.
TURN 1 and TURN 2
You can see his deployment and movement at the top of this post.  He took turns 1 and 2 to spread out towards the objectives.  His outflanking unit did not arrive on turn 2. He also forgot to shoot at the bridge for the tertiary objective.  Having two full turns to throw melta and autocannon shots into it, he probably would have taken the tertiary.   Neither of us realized his missed opportunity until late in the game.  So at the end of turn 2 he had board control, his Vendettas both had flat out cover, and his reserved Veterans were still reserved. 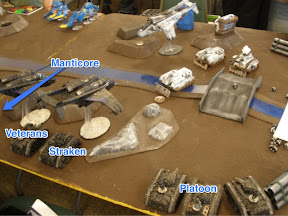 My turn 2 my entire army arrived save for one Vendetta.  Thank you, Astropath.  Al’rahem arrived on my right flank, coming into my opponent’s deployment.  Unfortunately, his meltas would either miss or fail to really damage anything.  It was a lack luster arrival.  Marbo also arrived, dropping in between the two squadroned Hydras, stunning one. 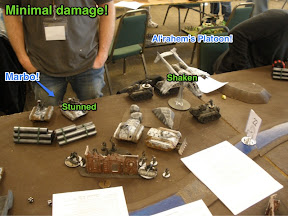 My Manticore rolled on as far away from my opponent’s guns as possible, and fired off a rocket to little affect.  The Vendettas came on and took a single shot at each of his Vendettas.  Then Straken, my infantry, and my single veteran squad rolled onto the middle of my table edge, eyeing up the two objectives to the left of my opponent’s deployment zone.  I thought from here, if I could use my mobility to swarm each objective, then I should be able to beat back his relatively small mobile elements.  I would just need to silence his guns long enough to get into position.  Al’rahem and Marbo seemed up to the task, but they would need to do more than they had this first round.


At this point I stopped taking pictures.  My poor first round of shooting meant I needed to play a tight game to pull this one out.  I would rather play a tight, undocumented game, than give a well documented loss.  Haha.
TURN 3
Having suffered little from my opening volley, all my opponent’s guns turned on Al’rahem.  Though I had cover for most of his shots, only one chimera remained in his deployment zone, if that.   Al’rahem’s group might have been completely demeched at this point.
He took a moment before deciding how to kill Marbo.   I noticed his indecision and immediately understood his conundrum.    Marbo sat between both his Hydras, one being stunned.  I had positioned him so that none of the rest of his army had line of sight.  So, his only option was to turn his other Hydra on Marbo, or risk Marbo’s wrath for another turn.   So the Hydra guns slowly turned around, and locked onto the lone guardsman.  Obviously, I went to ground for my 6+ cover save(5+ thanks to stealth), but it didn’t help.  Marbo was obliterated, but at least he kept the Hydras off the rest of my army for a turn.
His Plasma Russ rolled over the top of the bridge, and managed to immobilize my Platoon Commander's chimeras.   His outflanking melta veterans arrived at this time as well, coming in near my Manticore.  They would manage to immobilize it, before getting fried next turn.
His other two veteran squads continued to move out towards the open field objectives.
My turn 3 saw my remaining Vendetta stay in reserve, my melta veterans moved to help out the Manticore. My meltas took out his chimera, and my chimera’s heavy flamer toasted the now disembarked veterans.  They ran for the lives.
Al’rahem’s battered remnants continued the fight, trying to make each remaining melta shot count.  He had multiple flamers in the area, so I tried to stretch my men out, to reduce their impact.  If only they could hold on for one more turn, they would fulfill their mission.  One of Al'rahem's infantry squads had a single melta gun left alive. This brave soul marched straight towards Creed's chimera, and put a solid melta shot straight through its hull.  Unfortunately, this caused an explosion which killed the poor fellow in return.
Straken pushed for the middle objective with two of his infantry squads.  I think I stunned and immobilized the enemy chimera that was already sitting on the objective.  I turned one of my Vendettas on the Russ, shaking it, and the other on his last Vendetta, shaking it too.
TURN 4
On turn 4, he pulled his Russ back to his side of the bridge, retreating to try and protect it.  His remaining Vendetta went flat out towards the farthest objective, hoping to contest it at least I suppose.  One of his veteran squads was running, another was sitting in a stunned/immobilized chimera at mid field, and a third was sitting on the far objective inside a chimera.
Little damage was caused, except to Al’Rahem’s contingent.  At the end of his turn Al’rahem was dead, and only a single infantry squad was left in his deployment zone, and they would not last through turn 5.
My turn 4 was a very pivotal turn for me.   My final Vendetta arrived, taking a single shot on one of his Vendettas, knocking it out of the sky.  The infantry squad with Straken blew up the chimera of the veteran’s guarding the mid field objective, pinning them in the process.  My plethora of nearby flamers would make sure they didn’t make it out of that crater alive. Straken’s men then took a few fateful long range melta shots at the Veteran squad guarding the far objective, wrecking their vehicle.  As they stumbled out the back of the chimera, bunched up and reeling from shock, my Manticore lined up its shot.  Two direct hits, each covering ten men that were out of cover.  The twenty hits then caused twenty wounds.  I didn’t roll any 1s.  I explained to him that his best bet was to go to ground for a 6+ save, and basically hope someone had two 6s for their cover saves.  It didn’t happen.
In one turn, his left flank was blown wide open.  Granted, it was a weaker flank compared to how many chimeras I was committing to those two objectives, but the decisiveness with which it was taken out was awesome to watch (at least from my end of the table, probably not from his). Maybe if he had been less protective of his Leman Russ and pushed it into the left flank it would have been more difficult to take.
TURN 5
His turn 5 saw him commit most of his forces to taking out Al’rahem’s final squad, which he succeeded in doing, finally clearing out his deployment zone.  His Plasma Russ took some shots at chimeras, but didn’t do much.
On my turn 5, my Veteran squad’s chimera drove 12”, turned, and flung its cargo onto the far objective.  My platoon commander took refuge in the crater that once belonged to enemy veterans, scoring my second objective.  And my mid field infantry squad ramped over the bridge, driving 12” into his deployment zone, turned, unloading its cargo as well.  After the bad turn 4 he had, and after his triumph of finally removing Al’rahem’s remnants from his deployment zone, I felt bad for this last push, but such is table top war.


POST GAME
I took the primary and secondary objectives, and despite having turn 5 to turn most of my guns on the bridge, I wasn’t able to take tertiary.
I had two rounds of mediocre to bad shooting at first, but my execution in turns 4 and 5, combined with the fact that I denied him two full turns of shooting, gave me a very decisive win.
I toss this one up to strategy.  If I had deployed and tried to go toe-to-toe with him I would have been bloodied and beaten and struggling for a tie at best.    Denying him two full turns of shooting was critical against a long-range shooting list.  It also helped that the secondary objective made destroying Al’rahem a crucial objective, forcing my opponent to commit more resources towards him than he would have otherwise wanted to, taking some attention off of my front lines.

How it works-
Each model has a score based on its size.